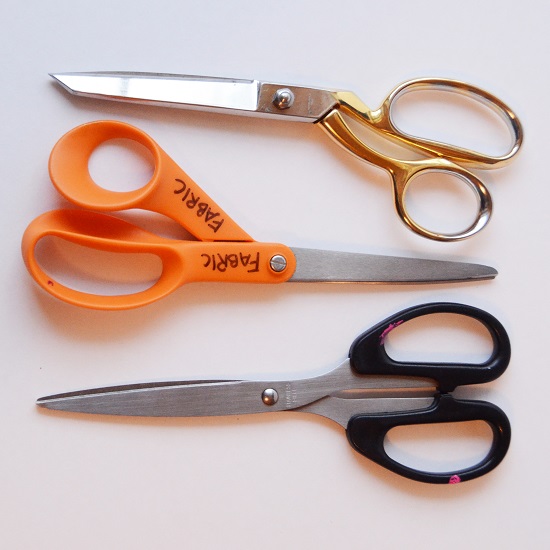 …or, nobody better touch my fabric scissors!

I read a post at So Sew Easy all about cutting paper with your fabric scissors.  As in, don’t do it.  (Her post also explains why it is that cutting paper will dull your scissors, which I found super interesting.) Which got me thinking about what I cut with my own sewing scissors.

I thought I’d share a little about how I treat my own fabric scissors. I’m calling it my 3 tier system because it sound so organized and so intentional but really it’s just all about keeping my fancy scissors away from anything that might dull their pretty blades.

The top tier scissors are my Ginghers – or, as my daughter likes to call them, my “golden scissors”.  They are used only on fabric, and boy do they cut through fabric! Like buttah.  Nobody touches the Golden Scissors but me.  My Golden Scissors are special and only ever cut fabric.  If I’m cutting fabric with pattern tissue pinned on top or cutting interacing, I use my tier 2 scissors…

These are my Fiskars.  Good scissors but not as good as my Ginghers.  Luckily not as expensive, either.  So when I’m cutting fabric that might not be good for my precious Gingher blades, I use these. I can tell which ones are my fabric scissors because they’ve got the word “fabric” written on them in Sharpie.  Clever, I know. Because I sometimes cut things I shouldn’t with them, they will eventually dull and then they’ll be demoted to…

My lowest tier of scissors, usually a pair of fabric scissors that don’t cut as nicely as they used to.  These I use on everything – paper, cardboard, plastic, just about anything. There are no restrictions on these scissors and these are the only ones my family is allowed to touch.

Actually, now that I think about it… there’s one more tier of scissor below the Everything Scissors.  The “I Don’t Give a Sh*t” scissors.  The ones that really should be thrown away because they’ve got nicks on the blades.  It really really doesn’t matter what happens to them.  These are the ones I use to cut wire or take out to the garden to trim plants, because if they get destroyed I really don’t give a sh*t. Ha!

So there you have it, my 3 Tier Scissor System. It sounds so official.